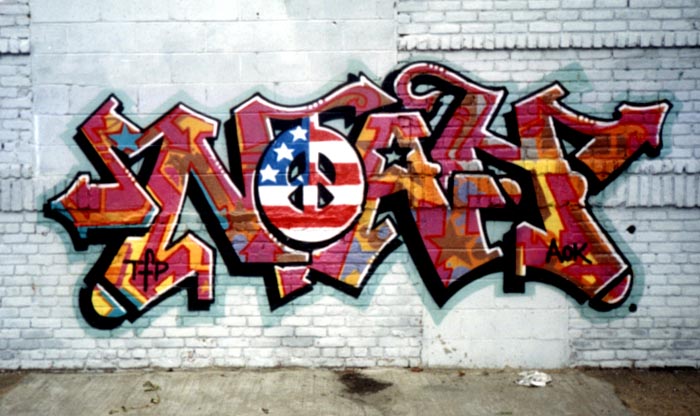 NOAH first started writing around 1985. A member of The Fantastic Partners, a Bronx based crew that first came together in the early ‘70’s, NOAH continues to build on what began nearly 20 years ago, both through graff as well as other more traditional mediums. Check out some of NOAH’s work above or visit www.Graffiti.org. Also visit www.NoahMcD.com to check out some of Noah’s more recent design work outside of graff.

RIOTSOUND.COM: Prior to graff, did you seek any other route to develop your artistic ability?

NOAH: When I did graff it was mostly about graff. More recently I’ve been exploring new avenues, graphics, illustration and painting.

RIOTSOUND.COM: When you first started, how much time did you devote to writing?

NOAH: Who knows? It’s all I used to think about. Got too many other things I want to accomplish in life now, graff just complicates things for me. But still on occasion I get the urge.

RIOTSOUND.COM: Have you always written NOAH?

RIOTSOUND.COM: Who were some of the writers that inspired you early on?

NOAH: PURE FBA TFP AOK was my mentor. SENT TFP, STAK TFP and REAS AOK are my other main influences. I give them mad props for inspiration and being such great friends.

RIOTSOUND.COM: From 1985 on, how long did it take until you realized that graffiti was something you were going to stick with for a while?

NOAH: Honestly I really didn’t break out until the early 90’s. That’s when people really started to notice me. I was a late bloomer but I made up for it I’d like to think. Honestly I really don’t care what anybody else thinks, I know what I did and that’s that.

RIOTSOUND.COM: If someone is not taking the risks, are they really doing graff? How different is drawing something on a piece of paper and printing it in a magazine?

NOAH: They are two totally different worlds. I do graphics and paint these days. A lot of people I know have made the transition and we know the real ones from the fake ones. As long you’re happy with what you doing, that’s all that really matters, but don’t try to be something you’re really not.

RIOTSOUND.COM: What are your impressions about graff overseas?

NOAH: I know quite a few writers overseas that have been and are still rocking. MILK, DELTA, KAMI, SET, ELK (just to name a few) are no joke. I think the main difference is the style and the fact that graff overseas doesn’t carry the same baggage as it does in NYC.

RIOTSOUND.COM: Do you prefer quality over quantity?

NOAH: I’ve dabbled in most aspects of graffiti. I’ve always believed in quality but occasionally would have the itch for quantity.

RIOTSOUND.COM: Who are some of your favorite artists outside of graff?

NOAH: I couldn’t even begin to go there. There are so many dope artists past and present.

RIOTSOUND.COM: Graff is often grouped with Hip-Hop as one of the four elements. However it is older than B-Boying, DJing and MCing. Do you see graff as having its own distinct identity outside of Hip-Hop?

NOAH: Graff is completely separate from the rest of the Hip-Hop scene. It’s illegal, that’s all I got to say.

RIOTSOUND.COM: What are your five favorite albums?

RIOTSOUND.COM: Tell us about some of your upcoming projects.

NOAH: I’ve done a lot of commercial work in recent years. At the moment I’m working on paintings for an up and coming show, they are going to turn heads. I’m out, NOAH TFP AOK 2003 ORO R.I.P.